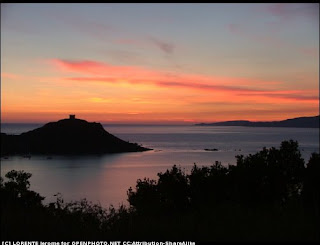 Beyond the distant fringes of this vast and sleeping nation
Beyond the rosy tinges of the dawn
Beyond the boundless limits of a wondrous creation
Beyond the line that human hand has drawn
There is a Hand, an unseen Hand
Which holds a slender chord
And nature heeds its each command
In awe of Heaven's Lord

Email ThisBlogThis!Share to TwitterShare to FacebookShare to Pinterest
Labels: Poem about Dawn

His loving gifts are but treasures to borrow,
For no one but He knows our day of sorrow,
When time will come knocking on our door of woe
And the hour has come for us to let go,
We lay no claim to these earthly flowers,
By His gracious Name these gifts are ours…

…to be blessed with awhile and bless others too,
Until we are called to let them go,
Be it out of our door or out of this world
He owns every man, woman, boy or girl,
And it comforts me, oh it comforts me so
To know that our God will never let go

April 2009 All Rights Reserved
Posted by Janet at 10:43 PM No comments: Links to this post

Some dads are really, really cool, and some are really smart,
Some dads barely went to school but still have big soft hearts,
Some dads stand up straight and tall and look all sober-like
As if they’ve never thrown a ball or raced on their old bike,
Some dads like to tease and wink and some dads laugh a lot,
I guess, I suppose, it depends, I think, on how many bills they’ve got,
‘Cause dad says, as long as the bills keep a-comin’,
He’ll have to get up an’ keep on a-workin’,
And God bless the dad that keeps on a-hummin’
Even when the bills keep a-comin’

Some dads make lots of money and some, I’ve heard, are broke,
Some say things like sweetheart and honey and some dads never joke,
Some dads work from dawn ‘til dark with little time to play,
Some take their children to the park and some just go away,
Some dads work so very hard so mother can stay home,
Some dads are so very tired, when at last they come,
But, God bless the dad, who at the end of his day
Still gets down on his knees to pray,
And God bless the faithful dad who
Teaches his little ones to pray too

Some dads are really big and tough, while some are short and thin,
Some dads are kinda’ rough and some are gentlemen,
Some dad’s hair is curly and some dad’s hair is gray,
Some don’t really worry ‘cause their hair has gone away,
Some dads drive pick-ups shiny and new, some say any wheels will do,
As long as it takes me to work and such, and the insurance on it isn’t too much,
Some dads whistle and some dads sing,
At home some dads feel as rich as a king,
But for one thing I sure am glad,
God knew how much we’d need some dads

Some dads read God’s word every night, some never read at all,
Some dads teach us wrong from right to guide us lest we fall,
And some dads are a little like God, I suppose,
‘Cause through trial and error this dad knows
Though hearts be broken and sometimes need mending,
A father’s love is never-ending,
And God bless the dad whose love never fails,
When the going gets bad, love still prevails,
So, for one thing I sure am glad, God knew how much we’d need some dads,
Some dads’ sure leave big shoes to fill but the One who guides them will be there still,
Someday, when someone says they’re glad God knew how much we’d need some dads

All rights reserved
Posted by Janet at 10:33 PM No comments: Links to this post

Janet
I am a wife, mother of four,daughter of a King!!!

For God so loved the world
that He gave His only begotten Son
that whoever believes in Him
should not perish but have
everlasting life.